New Delhi: Recently the Embassy of Slovakia at New Delhi and International Chamber of Media And Entertainment Industry formed an association under the name and banner of Indo Slovakia Film And Cultural Forum.

The organization was launched at the Embassy premises. This is first of its kind where film, television, media, art and culture, fashion, tourism, skill development and related business will be promoted to bring in two countries close to each other.

Sandeep Marwah President of ICMEI requested the Ambassador of Slovakia to India H.E. Zigmund Bertok to be the first Patron of the organization.

“The association will grow much faster under the leadership of H.E. Zigmund Bertok a capable and dynamic administrator who believes in cultural diplomacy,” said Sandeep Marwah President Marwah Studios and ICMEI.

“I will cooperate to my best to fulfill the needs and requirements of the forum and to meet the aims and objectives of the forum,” said H.E. Zigmund Bertok while accepting the memento.

Zuzana Mezencevova Cosul, Ashok Tyagi Secretary General ICMEI and Rajiv Mathur Director ICMEI were also present there. Ambassador of the Slovak Republic to India, Zigmund Bertok, a Doctor of Law, is a professional diplomat. Before coming to India in December 2013, he served his country in Beijing, Cairo and Helsinki and at home in various capacities.

Mon May 7 , 2018
New Delhi: Yog is ‘Dhyan Se Gian’ from meditation to knowledge. It is the art and science of Positive Thinking. What you can think you can do it. The positive energies start supporting when you start working and your intentions are good,” said Sandeep Marwah patron to Namo Gange at […] 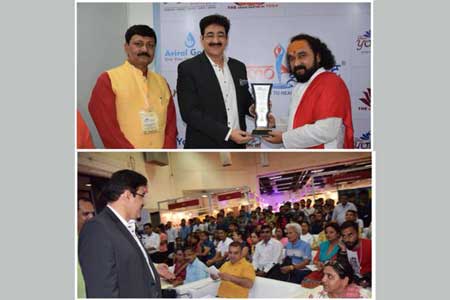