Austria: The President of World Peace Development And Research Foundation with its international head quarters in Noida India, Sandeep Marwah visited one of the oldest monasteries in Austria during his visit to Austria.

â€œI have been visiting Temples, Mosques, Churches and places of various religions to deliver the message of love, peace and unity. This visit is in relation to the same cause,â€ said Sandeep Marwah at Melk Abbey.

Melk Abbey is a Benedictine abbey above the town of Melk, Lower Austria, on a rocky outcrop overlooking the Danube river, adjoining the Wachau valley. The abbey contains the tomb of Saint Coloman of Stockerau and the remains of several members of the House of Babenberg, Austriaâ€™s first ruling dynasty. The place is visited by large number of tourists every year.

Tue Sep 19 , 2017
Czech Republic: â€œWhat a pleasure to be here at Cesky Krumlov, small town with historical importance in Czech Republic. It is an example to all the tourism departments and administration of our districts, how well a place canÂ  be maintained without large funds,â€ said Sandeep Marwah Managing Director of NFTC- […] 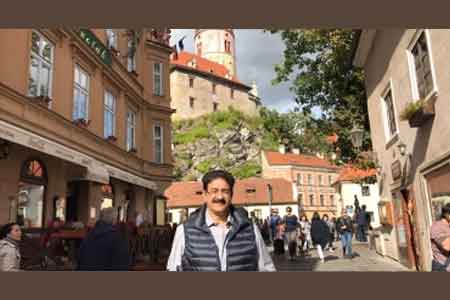