Noida: The great musician and activist Prince Ali visited Marwah Studios at Noida Film City to join hands with World Peace Development And Research Foundation of AAFT for spreading the word of Peace.

Prince Ali entered the US market in 2008 with his unique rhythms and vocal range. This twice-platinum composer and singer is driven by a mission to unite the world’s diverse religions and races. Over the past few years, his foundation “World Peace for Life” has contributed to providing the basic necessities of food, clothing and education to children in war-ravaged countries, including Afghanistan, Israel, Mexico and Pakistan.

Prince Ali has won several awards and has collaborated with such diverse greats as Aerosmith, Janet Jackson, George Clinton, Al Gerou, Brian McKnight, Cool and the Gang and Howard McCrary. Working closely with Peter Rafelson (writer and producer of hit songs for many legends including Madonna, Britney Spears and most recently the Glee Sound Track).

“We are very happy with the presence of Prince Ali and have requested to perform in Delhi. The show will be announced as Music For Peace,” said Dr. Sandeep Marwah President of Asian Education Group.

Mon Nov 12 , 2018
New Delhi: Renowned media personality and educationist Dr. Sandeep Marwah was awarded with Global Unity Ambassador for his untiring efforts to unite the World through art and culture. Sandeep Marwah has been working for the Global Unity from last 33 years and has brought 145 countries out of 196 countries […] 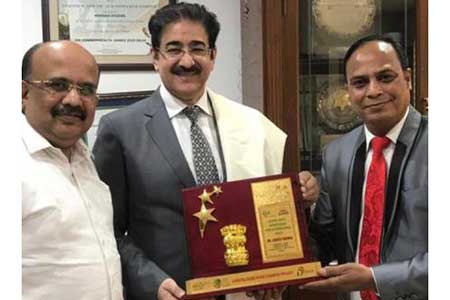