Noida: Like every year, this year also Marwah Studios in association with International Chamber of Media And Entertainment Industry and Asian Academy of Film And Television celebrated World Environment Day at Noida Film City.

“We have tried our best to bring awareness of all those programs which United Nations has been highlighting now and then. More than 24 subjects round the year we take up to popularize and support United Nations,” said Sandeep Marwah President of Marwah Studios and Patron to IFUNA- Indian Federation of United Nation Associations.

“World Environment Day (WED) is celebrated on the 5th of June every year, and is the United Nation’s principal vehicle for encouraging awareness and action for the protection of our environment. First held in 1974, it has been a flagship campaign for raising awareness on emerging environmental issues from marin pollution, human overpopulation, and global warming, to sustainable consumption and wildlife crime.,” said Dr. K.D. Gupta Environmentalist and Chairperson of Environment And Climate Committee of ICMEI.

“WED has grown to become a global platform for public outreach, with participation from over 143 countries annually. Each year, WED has a new theme that major corporations, NGOs, communities, governments and celebrities worldwide adopt to advocate environmental causes,” added Dr. V.K.Goswami ICMEI representative to NASA.

“The theme for 2018 is “Beat Plastic Pollution”. The host nation is India By choosing this Theme, it is aimed that people may strive to change their everyday lives to reduce the heavy burden of plastic pollution,” said Dr. Amit Kaur Puri Scientist from AKP Foundation.

“People should be free from the over-reliance on single-use or disposables, as they have severe environmental consequences. We should liberate our natural places, our wildlife – and our own health from plastics,” said H.E. Michael Aaron Oquaye High Commissioner of Ghana to India while inaugurating the session.

Large number of media professionals, filmmakers from Ghana, members of ICMEI, environmentalists, and students of AAFT and ASMS attended the event. A case study of Srita Vihar by J.S.Saluja was also discussed.

Mon Jun 18 , 2018
Noida: The President of Asian Academy of Film And Television- an international seat of learning nominated its alumna Srishti Kaur as the next Ambassador of Beti Bachao Beti Padhao specifically to the international marriages of our Indian girls. Dr. Sandeep Marwah President AAFT and Marwah Studios was earlier nominated as […] 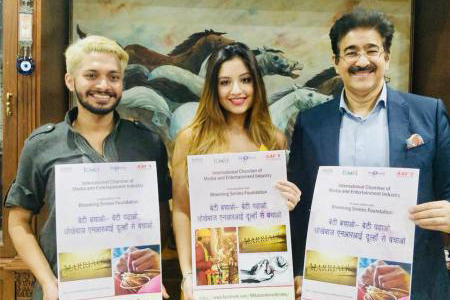