“We are ready to join hands with Marwah Studios for our upcoming film. This can be a joint venture between the two countries. It will lead to better cultural relations,” said K. Rajagopal filmmaker from Singapore.

“Our intentions are to join hands with Indian film Industry which is the biggest in the World. We will sure learn more tricks of the trade,” added Chai Yee Wei a film studio owner (Hot Cider Films) and film producer known for his film ‘Blood Ties’.

“We are thankful to Marwah Studios and AAFT for this wonderful interaction with the future film makers of this country. The business can be routed through Singapore High Commission for faster and better understanding,” said Kester Tay First Secretary, High Commission of Singapore in India.

Tue Mar 6 , 2018
Noida: IYF- International Youth Fellowship in association with IMEI-International Mind Education Institute organized, Korea a powerful workshop for the students of Asian Academy of Film And Television and Asian School of Media Studies at Marwah Studios. ‘How to develop leadership skills to apply to Global level’ was the topic of […] 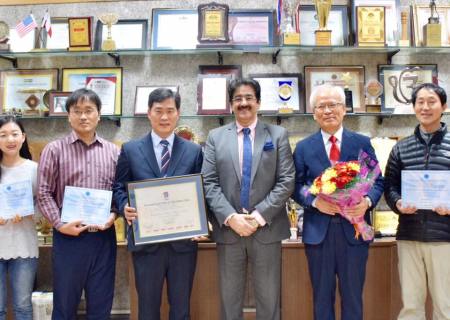