New Delhi: A working women delegation from Afghanistan visited Marwah Studios to built a better relation between the two countries through art and culture.

The delegation consisting of nine women under the leadership of Sajia Shojaei Film maker who discussed the further plans of promotion of art and culture under Indo Afghanistan Film And Cultural Forum.

“We are very keen in building up healthy relations with Afghanistan. Number of times we have organized workshops and music concert by Ustad Eltaf Hussain Sarahang at AAFT. We have produced two of the short films, directed by Afghani producer. Recently an AAFT scholarship has been handed over to Embassy of Afghanistan for the deserving student,” informed Dr. Sandeep Marwah President of ICMEI & Marwah Studios.

Dr. Marwah honored and presented membership of International Women’s Film Forum to all the members of the delegation.

Wed Aug 7 , 2019
New Delhi: An exhibition of paintings by Nandita Richie was inaugurated by renowned media personality Dr. Sandeep Marwah Chancellor of AAFT University and President of Marwah Studios at Palm Court of India Habitat Centre. “Nandita is as passionate about art as she is about conserving the natural resources of our […] 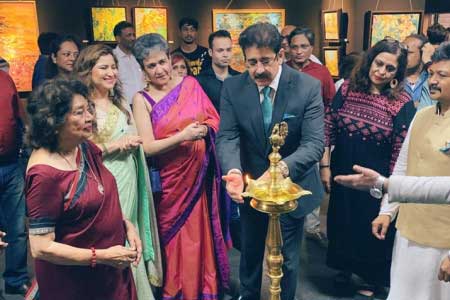