â€œAfter performing in more than 30 films as lead role Uttar Kumar has now shifted his base to Hindi Cinema and his film Dear V/S Bear is also the part of 7th Global Film Festival Noida 2014â€ Uttar Kumar was introduced to the huge young film audience who all knew him earlier.

â€œUttar Kumar is an AAFTian and his first film Dhakar Chhora was announced in the campus itself in 2004 which made him a very popular figure in the country. We wish him a very bright futureâ€ said Sandeep Marwah President GFFN while handing over the life membership of International Film And Television Club.

â€œI am indebted to Asian Academy of Film And Television, not inly I studied here, I also got my first chance from here. I am a student of Sandeep Marwah and would love to be student for my life timeâ€ expressed Uttar Kumar emotionally and thanked GFFN for recognizing him.

Tue Jan 5 , 2016
International Film And Television Club of Marwah Studios honored Shilpi Sharma with Life Membership of the Club. IFTC is the presenter of 9 different festivals of the country around the year. We are pleased to receive the young lady at the festival and her keen interest in World cinema. She […] 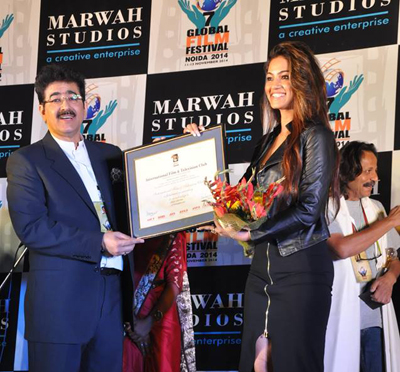