New Delhi: On the invitation of Dr. Sandeep Marwah President International Chamber of Media And Entertainment Industry, the Ambassador of Tunisia to India, H. E. Hayet Talbi talked about the investment opportunities and tourism of the country and addressed the members of the Chamber. The event was supported by Indo Tunisia Film And Cultural Forum.

Talking about the investment prospects in Tunisia the Ambassador informed that Tunisia is the Northern most country of the continent with close proximity to Europe. With population equivalent to Chennai, 50% of the population is youth. Majority of the students are pursuing or have completed their degree in Engineering which can give the investors’ confidence about the highly skilled work force. With 9 International Airports, 160 Industrial zones, 15 Cyber Parks and 20,000 Kms. Of roads, infrastructure of the country is well developed to lure investors. Indian companies like Mahindra and Mahindra., Tata Motors and many others are already operative in Tunisia. Apart from this the Government has also announced a number of incentive and subsidy schemes for foreign companies.

Speaking about the tourism in Tunisia H. E. Talbi informed that the culture of Tunisia is a mix of many civilizations hence the cuisines, the art forms, the dances are all different across the country. The coastal areas have beautiful beaches and with over 50 hotels of different categories some boast of their private beaches. Heritage sites and monuments of Tunisia are worth visiting. Different festivals are also held from time to time which gives the tourists an essence of varied cultures of Tunisia.

Tue Jul 6 , 2021
New Delhi: “I on behalf of Indian Media and Entertainment Industry and Art & Culture Fraternity of India take this opportunity to extend my heartiest congratulations to H.E. Gudmundur Arni Steffanson Ambassador of Iceland  to India and people of Iceland on the occasion of National Day which falls on17th June,” said […] 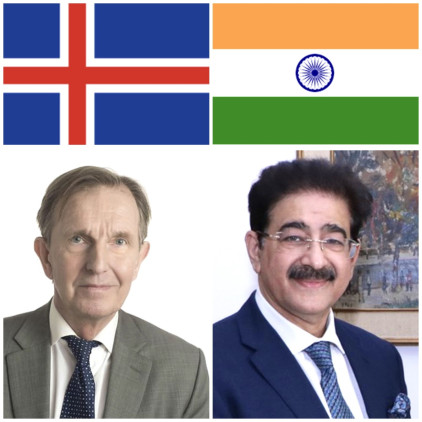