New Delhi; â€œI am amazed by the activities and continuous efforts of Sandeep Marwah in promoting films, television and entertainment business in this part of the World.
His innovative ideas and determination to make north as hub for films has seen a wonderful changeâ€ said Tigmanshu Dhulia renowned filmmaker from Mumbai.

Tigmanshu Dhulia started his carrier as casting director of feature film Phoolan Devi Bandit Queen at Marwah Studios. His hard work and caliber brought him to the highest platform. Famous for his films like Pan Singh Tomar recently honored with President Award as the best feature film of the year, he has also directed popular film like Saheb Bibi Aur Gangster Return.

Wed Jan 6 , 2016
â€œThis is for the first time in 67 years when two countries have joined hands with each other for the production of film in India. ICMEI has taken this initiative to promote the idea,â€ said Sandeep Marwah President of ICMEI handing over the agreement to the designated Director of Photography […] 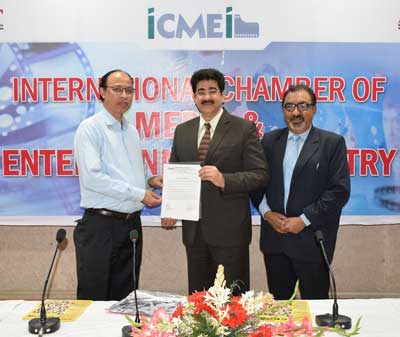