I am a Delhi boy, I always wanted to come back to Delhi with some kind of achievement. Tever is my first film as a Director. I am sure people of Delhi will like the filmâ€ said Amit Sharma Director of film Tever at New Delhi on the invitation of Sandeep Marwah President Marwah Studios.

â€œArjun has given his best to the film. I am happy with his performance. He has worked hard on the role,â€ said Sanjay Kapoor Producer of Tever.

â€œWe have left no stone unturned to make this film a complete entertainer. Songs, dialogues and music have played their role perfectly along with star cast,â€ added Boney Kapoor Presenter of the film.

â€œI am happy whenever I am in Delhi. The love and respect I get in Delhi makes me more close to people of Delhi â€ said Manoj Bajpai.

Wed Jan 6 , 2016
Bringing Noida to an international fame and earning Laurels for India, Sandeep Marwah has done a commendable job. I appreciate his strong determination to develop film, television and media business in this part of the Worldâ€ said Dr. Mahesh Sharma Minister of State (Independent Charge) for Culture, Tourism and Minister […] 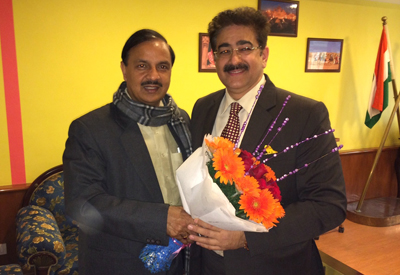