“We are pleased to welcome the starts of TBHP who all are in real good mood to do promotion of their film in Delhi NCR. Their visit has added suddenly new energy to the campus when students started running to towards auditorium to be part of the promotion planned for them in the campus of AAFT,” said Sandeep Marwah inviting stars to Marwah Studios.

Students asked ample questions and very patiently the actors present on the stage delivered the answers. Later Sandeep Marwah President Marwah Studios presented every one with the life membership of International Film And Television Club of AAFT.

Wed Jul 11 , 2018
New Delhi: A well-known film personality Sandeep Marwah President of ICMEI- International Chamber of Media And Entertainment Industry on Tuesday extended best wishes to The Bahamas on their National Day. The official letter of congratulatory message was sent to the consulate office. “We cherish our warm relations with The Bahamas & see […] 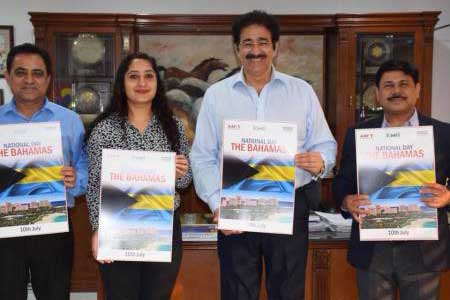