â€œInteraction with the industry is the specialization of our institutions. You learn in minutes when you are talking to the stars. An experience worth millions is distributed among students in no time,â€ said Sandeep Marwah President Marwah Studios and ICMEI introducing the cast of feature film LKSMLD.

â€œWe are here to be part of you, your excitement is the promotion of film and then the industry,â€ said Rahul Agarwal producer of the film LKSMLD. T.P.Agarwal President Film Federation of India and Indian Motion Picture Producers Association have presented the film.

â€œI got another opportunity to play a different character in the film. I always try to build the character from the observations I have stored in my mind. Acting is one of the most interesting profession,â€ said National Award Winner actor & writer Saurab Shukla known for his roles in Satya, Jolly LLB, Barfi, PK, and many more.

Director Manish Harishankar expressed the need of the film with a complicated and tough subject he opted for. He also answered many questions put up to him by the national press. Manish has already created his creditability through feature films like Phata Poster Nikla Hero, Azab Prem Ki Ghazab Kahani, Chaarfutia Chookare and Halla Bol.

The second lead of the film Kavita Verma also spoke to the students and narrated part of the story. She has been earlier part of feature films like Policegiri, R-Rajkumar, Click, Manoranjan, Krazzy etc.

Known for his TV serials like Ramayan, Pati Patni Or Woh and Reality shows like Jhalak Dhikla Ja, Nach Baliye Gurmeet Choudhary relate very well with the crowd of young students present there. Gurmeetâ€™s role in Wajah Tum Ho was also appreciated. â€œI am pleased to be part of this great event, I am enjoying every minute of it,â€ said he.

Vivaan Shah popular with films like 7 Khoon Maaf, Happy New Year, Bombay velvet said,â€I am charged with new energy after entering into this complex. Some energy is working to have so much of energy,â€

Later Sandeep Marwah honored the dignities with the life membership of International Film And Television Club of AAFT.

Wed Apr 5 , 2017
Noida; A powerful and a colorful Fashion and Design Week has been planned and announced by Asian Education Group to be held from 13th to 15th April at Marwah Studios Noida Film City. â€œThere is a huge demand for international events in Delhi and NCR. After the successful launching of […] 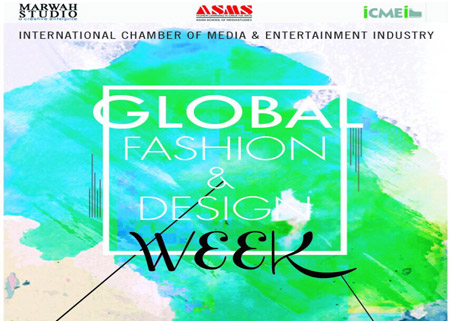