Noida: â€œPractice makes man perfect, deep love and passion for your profession gets you success. Continuous efforts will take you to a higher position,â€ said Padmashri Vidya Balan, renowned actor of Indian film industry here at Marwah Studios talking to the students of Asian Academy of Film And Television and Asian School of Media Studies. She was there to promote her new feature film Kahani 2: Durga Rani Singh.

Vidya Balan, is well known for her serial Hum Panch and then to most successful films like Parineeta, Dirty Picture, Kahani, Once Upon a time In Mumbai Dobaara, Humari Adhuri Kahani, Paa. She has worked with all the top stars and directors of the industry. She is the recipient of National Award for best actress and has been honored five times with film fare award and five screen awards.

Renowned writer Rajjat Arora, alumnus of Asian Academy of Film and Television, which she acknowledged, wrote her film Dirty Picture.

â€œThe job of the director is to bring all the resources together, be it creative, technical or financial to express his ideas through a story visually knotted,â€ added Sujoy Ghosh, the director of the film Kahani 2. He has been known for his films like Kahani, Teen, Ahalya, Bang Bang, Anamika, Aladin etc.

â€œIt is a wonderful moment when two giants of Indian film industry are here and sharing their experiences worth millions. The success of the film is in the hands of audience, before that it is important for the cast and crew to give their utmost efforts to the film and feel satisfied,â€ said Sandeep Marwah, President of Marwah Studios.

Vidya Balan and Sujoy Ghosh released the new T shirt of â€œNo More Missingâ€, an indication to create awareness by a national organization, to control the lifting and kidnapping of young children headed by Vandana Gulia under the patron ship of Sandeep Marwah.

Sat Dec 24 , 2016
New Delhi: It is a great concept to make films with mobile phones. Ten years back Sandeep Marwah President of Marwah Studios started this new wave in the World of Cinema and also started the first ever festival of cellphone cinema way back in 2006. Sandeep Marwah and Prof. Karl […] 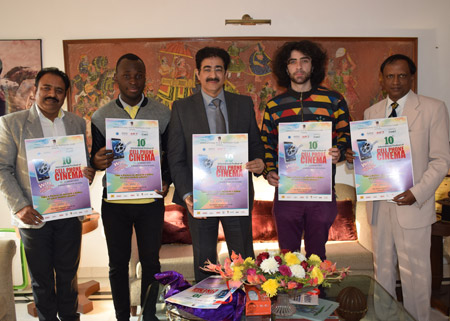