Choreographer of 1500 films and 8000 songs Ganesh Acharya danced on the tunes of Hey Bro songs and won the hearts of young crowd flooded in the auditorium. â€œI may be an actor and choreographer but my first love will remain Dancingâ€ said Acharya.

Ajay Chandhok who had been associated with David Dhawan for more than 30 films and famous for his earlier films like Chatur Singh Two Star, Nahle Pe Dehla expressed his experience in directing Hey Bro.

Wed Jan 6 , 2016
Noida Film City: The first ever Chamber of Commerce dedicated to Films, television and media ICMEI- International Chamber of Media And Entertainment Industry released its brochure officially at Noida Film City by Star Mohit Marwah fame for his feature film Fugly. â€œIt is my honor to be part of ICMEI, […] 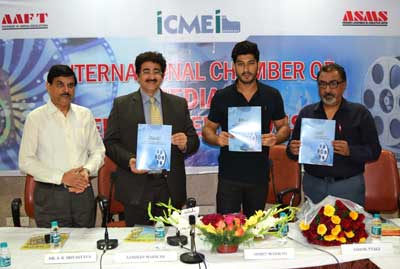