Noida: The lead pair of the forth coming feature film Bahen Hogi Teri Shruti Hassan and Rajkumar Rao along with the producer Amul Vikas Mohan visited Asian Academy of Film And Television at Marwah Studios in Noida Film City.

â€œWe are happy that today we have with us a remarkable and versatile actor Rajkumar Rao and an artist with title- the most desirable women-Shuriti Haasan to share their experience in this master class,â€ introduced Sandeep Marwah President of Marwah Studios.

â€œWe are here to promote our film. The film is meant for one and all who believe in entertainment,â€ said Rajkumar Rao. Every film teaches you a new genre and adds on to your experience. The film is also meant for college going students as it is their story,â€ added Shuriti Haasan.

The question answer session lasted for an hour where large number of questions were asked by the young media students of AAFT.

Sandeep Marwah presented the life membership of International Film And Television Club of AAFT to all the three dignities Shuriti Haasan, Rajkumar Rao and Amul Vikas Mohan associated with the film.

Ajay K Pannalal has Directed the film, written by Vinit Vyas and Rajat Nonia, Cinematography by Shemsher Singh and Edited by Murudeshwar,

Wed Jun 21 , 2017
New Delhi: Sandeep Marwah needs no introduction today. He is one of the most popular Indian names abroad. His interaction with 164 countries of the World has brought him a title of Global Cultural Minister. Founder of Noida Film City, Asian Academy of Film And Television, Marwah Studios and 100 […] 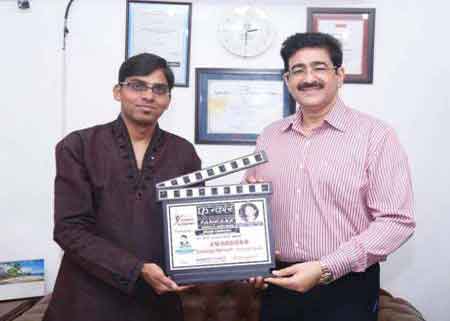