New Delhi: After the powerful speech of Sushma Swaraj Minister of External Affairs, Government of India in an event organized by Indian Council for Cultural Relations at Pravasi Bhartiya Kendra Auditorium on the occasion of World Cultural Day Sandeep Marwah expressed his excitement to large group of people at the centre.

“It has been more than twenty five years we have been in the business of soft power diplomacy -building up relations with the whole World through films, television, media, art and culture,” said Sandeep Marwah President of Marwah Studios recently titled as Global Cultural Ambassador.

Sandeep Marwah informed his association with 145 nations of the World where Marwah Studios in- link- with different Ministries, national and international organizations have organized more than 3500 events of small and big nature to be in touch with all these countries.

Global Film Festival, Global Festival of Journalism, Global Fashion Week, Global Literary Festival and many Global Summits on different Subjects round the year have attracted 145 Nations to India. “We have been able to attract two million people to Noida Film City from all over India and abroad, Where as we have been able to attract students from 120 countries of the World to study Cinema, television, media, fashion, animation, performing arts etc. in India,” said Marwah.

“The formation of International Chamber of Media And Entertainment Industry in 2014 was a step to support Prime Minister and Government of India in fulfilling the dream of using soft power of India to built-up the better and strong relations between India and rest of the World,” added Sandeep Marwah.

The event was attended by Ambassadors, High Commissioners, Diplomats, Politicians, people from all the Ministries of Government of India, members of different political parties and film, television, art and cultural fraternity. 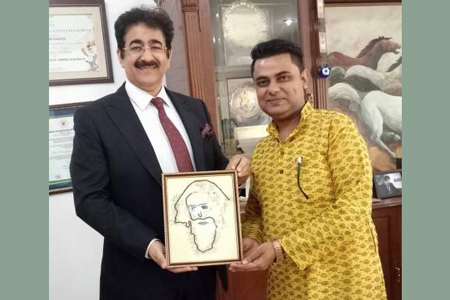