“We are thankful to all those who have respected the importance of journalism-the forth pillar of Democracy. Journalism has always kept us alive and alert. The truth must be brought to the table. NAI has gone out of way to look after the needs of its members and kept them motivated to do their best all these years,” said Sandeep Marwah Chief Patron of the association at the inauguration of silver jubilee function.

The organization started by Dr. Gaur 25 years back and now well controlled by Vipin Gaur. Late Dr. M.R. Gaur always believed in that “To be a journalist you need courage, dedication and honor. It’s not only about knowing the truth yourself but about bringing it out in front of the world,” reminded Marwah who is a part of the team from very beginning.

“I congratulate NAI and all the members on this silver jubilee celebration. NAI has studied all the needs of the journalist and seriously working on them. If I can be of any need please do not hesitate to include me in the team,” said Manoj Tewari MP and Head of BJP Delhi.

“I have taken this responsibly to look after the organization; I have left no stone unturned to make it the most popular, biggest and useful setup for journalists. We will march further to bring in all those facilities which journalist of this nation is looking for,” added Vipin Gaur General Secretary.

Tue Jan 16 , 2018
New Delhi: The popular cultural organization Udaan invited renowned media personality Sandeep Marwah President of Marwah Studios to inaugurate the National Film Appreciation Course at IIMC-Indian Institute of Mass Communication meant for new comers. “I am impressed by the interest shown by the students of different colleges of Delhi and […] 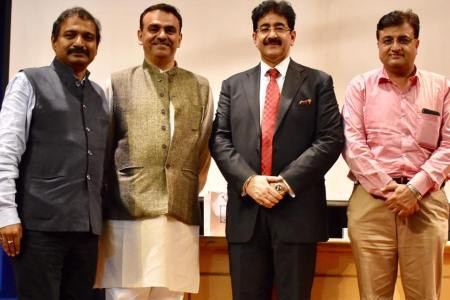