International Film And Television Club of Marwah Studios honored Shilpi Sharma with Life Membership of the Club. IFTC is the presenter of 9 different festivals of the country around the year.

We are pleased to receive the young lady at the festival and her keen interest in World cinema. She has already done a lot in the south of India and now starting in a big way in Mumbai. We wish her a great successâ€ said Sandeep Marwah presenting the membership certificate.

Shilpi Sharma debuted in Telugu film Green Signal as one of the lead in 2014 produced by Maruthi Dasari. She played the lead role in Kannada movie Aakramana. It is a horror movie made both in 2D and 3D format and it is the first 3D horror movie in Kannada dubbed in Hindi, Telugu and Tamil. She is now slated to debut in Bollywood with Salman Khan in No Entry Mein Entry sequel of No Entry This movie is directed by Anees Bazmee.

Tue Jan 5 , 2016
The film technicians are as important for us as actors and directors of the feature films. The brilliant and admirable work by Mahesh Aney in the field of Cinematography is worth rewarding,â€ said Sandeep Marwah President of Marwah Studios at 7th GFFN. The board of 7th Global Film Festival Noida […] 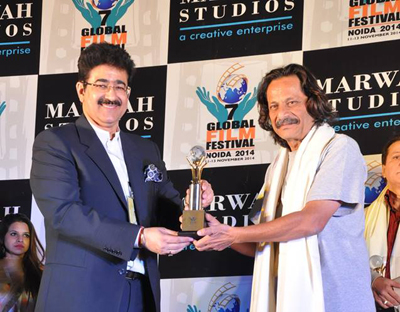