New Delhi: Minister of Skill Development and Entrepreneurship Dr Mahendra Nath Pandey and Chief Scout For India Dr. Sandeep Marwah conferred the ‘Sarvashreshtha Mantri 2019’ to 21 ministers chosen from across 29 states here in a ceremony organized at Vigyan Bhavan, New Delhi. The third edition of the award ceremony was organized on November 9 to felicitate the best ministers chosen in various categories through a survey conducted by Fame India Magazine and Asia Post.

“The awards aim to recognize and honour the outstanding performing ministers from various states. Twenty-one categories have been finalized so far. The list includes ministers from all governments across party and political lines,” said Dr. Sandeep Marwah also Chancellor of AAFT University.

“In our eight-year journey of positive journalism, Fame India has experienced that even a few encouraging words expressed to our worthy people of society working towards positive change, adds a pair of new wings to their performance,” said US Sonthalia, Editorial Director, Fame India.

At the ‘Sarvashreshtha Mantri 2019’ awards ceremony Kirit Premjibhai Solanki, Member of Parliament (LS), Rana Yashwant, Founder-Editor, The Front were also present at the stage. Here is the list of ministers awarded at the ceremony:

Sandeep Marwah at Get Together In Honor of Lord Rami Ranger

Tue Nov 12 , 2019
New Delhi: A get-together in honor of Lord Rami Ranger was organized at New Delhi and some of the prominent people from all strata of life attended the same to congratulate on his being nominated as Lord in British Parliament. Dr. Sandeep Marwah Chief Scout For India was the special […] 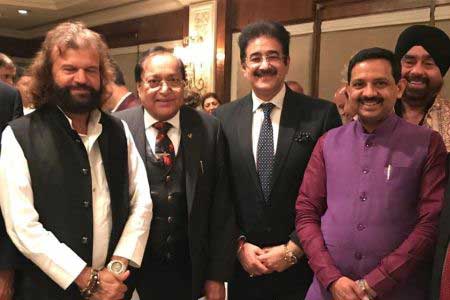