New Delhi: Films, television, media, art and culture promoter Sandeep Marwah is now the patron to our organization. His contribution to the nation in music is also worth praising,â€ said V. K. S. Sood the Chairperson of Sangam Kala Group while presenting the honor to Sandeep Marwah at Rail Bhawan Auditorium at New Delhi.

â€œIt is my privilege to get associated with 40-year-old organization, which has given some of the finest singers to the nation. I will feel strong and solid if I will be able to promote the activities of this powerful medium of music through this organizationâ€ said Sandeep Marwah accepting the award.

Sangam Kala Group needs no introduction to the music, dance and drama loving audience. The Group is prominent non-commercial registered cultural group which is engaged in the promotion of Countryâ€™s artistic cultural tradition. The group owes its existence to the concerted efforts and devotion of young amateur artists dedicated to the cause of cultural promotion.

Around 20 best singers selected through competition were given an opportunity to sing on this final day. All were given a wonderful chance to record their interviews and songs on Radio Noida 107.4 FM and Marwah Studio television station. 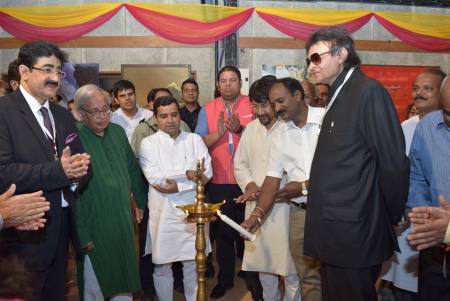