New Delhi: The President of International Chamber of Media And Entertainment Industry Dr. Sandeep Marwah Visited the Embassy of Kuwait on the invitation of H.E. Mr Sami Mohammad Al-Sulaiman Ambassador of Kuwait to India.

“We extend our partnership to the country of Kuwait and would love to enhance our relationship through cultural diplomacy. We have always believed that art and culture can play better and bigger role  in bringing people of two countries together,” said Dr. Sandeep Marwah offering permanent membership of the Chamber to  the Ambassador.

“We will soon be launching Indo Kuwait Film And Cultural Forum and will take our relationship to new level. It is important for people of both the countries to know each other better,” said H.E. Mr Sami Mohammad Al-Sulaiman Ambassador of Kuwait to India.

Kuwait is a constitutional sovereign state with a semi-democratic political system. Kuwait has a high-income economy backed by the world’s sixth largest oil reserves. The Kuwaiti dinar is the highest valued currency in the world informed Ashok Tyagi Secretary General of ICMEI.

According to the World Bank, the country has the fourth highest per capita income. The Constitution was promulgated in 1962. Kuwait is home to the largest opera house in the Middle East. The Kuwait National Cultural District is a member of the Global Cultural Districts Network. 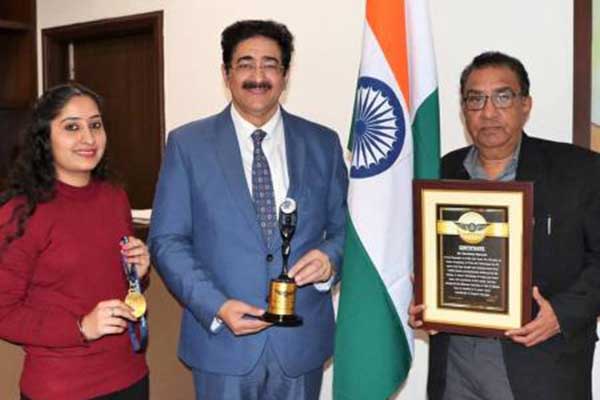