Noida: The President And the founder of Asian Education Group Dr. Sandeep Marwah addressed the members of the Marwah family on the first working day of New Year 2019.

“I am thankful to each and every one of my family who all have contributed to the growth of Marwah Studios and Asian Education Group-A Creative Enterprise. Together we have changed the definition of Media Education. We have created a wonderful niche for our self in the international media and education market,” said Dr. Sandeep Marwah President of AEG.

“The whole World is looking up to us now as the ‘First Film University of The World” though many firsts are associated with us. We are first film city of North India (fourth in the country), The First Professional Film Studios of North India, first private film school of India(fourth in the country),First Film Club, First Private Film Research Centre, First dedicated Media and entertainment Industry Chamber and so on,” added Dr. Marwah.

“Our students have done extra ordinary well in last so many years. All together we have created 7 World Records in media education. The organization has bestowed upon more than 630 awards which includes 120 international awards and accolades,” expressed Dr. Marwah.

“We have been honored in British Parliament, Indian Parliament, Bavarian Parliament. We have been nominated by more than 40 Governments of different countries from Asian, African, European and American continents as their representatives. Government of India has also designated us for their different schemes launched in last few years.

“We have been able to add new schools in our present setup like School of Still Photography, School of PR Events And Advertising, School of Performing Arts, and A law School in last few years,” confirmed Dr. Marwah.

“Lets work hard and honestly to make Asian Education Group as one of the finest seat of learning in the World. Our Country men, our education industry and our Government should feel proud of us.

Sandeep Marwah now one of the most popular and renowned media Celebrities of the World has been honored four times Doctorate from Serbia, USA and India. Offered many Ambassadorships, Patron ships, Advisor ships, and international designations. He has been Chairing around 100 different National and International organizations. Government has nominated him as the Chancellor of AAFT University of Media And Arts. Dr. Marwah is most eligible for Noble prize and a Minister ship in Cabinet.

Wed Jan 9 , 2019
Noida: A powerful national level meet of writers took place at Asian Academy of Film And Television organized by   International Chamber of Media And Entertainment Industry at Marwah Studios Film City Noida. Many writers from all over India representing their fraternity discussed and came to the conclusion that an active […] 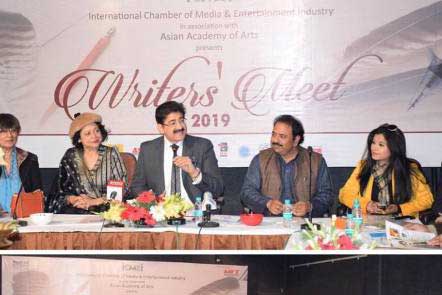