The World is surviving because of the good human beings and their good deeds towards humanity. There are People who have devoted their life for the betterment of the society and especially the downtroddenâ€ said Tashi Wengdu CEO of Federation of Tibet Cooperatives of India Limited.

â€œSandeep Marwah has been working for the good cause from last 25 years. His forte may be media but his every activity marching towards international Unity, Peace, and Loveâ€ added Chandrakant Kharare Patil Secretary General of WPDRF.

Exhibition of Paintings by Bharti Sharma Inaugurated at ISFI

Tue Jan 5 , 2016
â€œColors can speak a lot when they are spread on canvas with the feelings from heart and blended with experienceâ€ said Sandeep Marwah President of Marwah Studios introducing Dr. Bharti Sharma renowned artist on the inauguration of exhibition of paintings by her at ISFI. â€œThe paintings are creating new energy […] 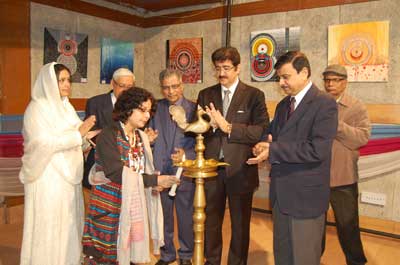