Nicosia: More than 100 filmmakers from all over the World attended the first Cyprus Film Summit at Filoxenia Conference Centre at Nicosia along with many local filmmakers and professionals.

“It was an excellent time to brief the international audience about the existence of Indo Cyprus Film And Cultural Forum and its activities in India and Cyprus. I am sure it will induce many to start such type of organizations back home and start thinking of Cyprus as an excellent film location for their forth coming films and TV productions,” said Sandeep Marwah President of Indo Cyprus Film And Cultural Forum.

Sandeep Marwah also informed the audience about India as the largest film industry of the World also supported by a very strong media setup of the Republic of India.

Marwah invited filmmakers to India and be a member of ICMEI- International Chamber of Media And Entertainment Industry. He informed about the 162 scholarships announced by AAFT-Asian Academy of Film And Television and 162 Joint Ventures announced by Marwah Studios for making of short films.

“We are trying our best to bring some known film makers to Cyprus from India to have their shooting of main Hindi Cinema,” added Marwah. 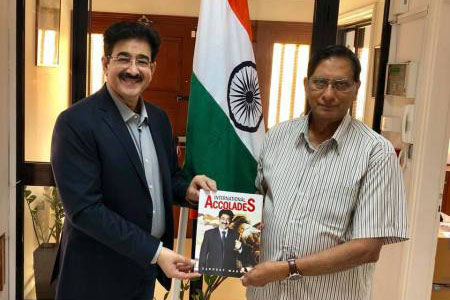