New Delhi: Embassy of Japan celebrated the birthday of King of Japan at the Embassy campus. Jitendra Singh Minister of State for the Ministry of Development of North Eastern Region, Prime Minister Office, Personnel, Public Grievances and Pensions, Department of Atomic Energy and Department of Space was the Chief Guest..

A large gathering of Ambassadors, High Commissioners, diplomats, socialites, people from media and different industries were there to participate in the get together.

Sandeep Marwah President International Chamber of Media And Entertainment Industry was the special invitee at the occasion. Marwah met the Ambassador and briefed him about our relations with Japan through Japan Information And Cultural Centre and Japan Foundation.

India and Japan have very cordial relations and both the countries are enjoying fantastic trade relations. â€We need each other, not only the trade in between two countries have gone up the tourism has also increased in last few years,â€ said H.E. Kenji Hiramatsu Ambassador of Japan to India.

Tue Dec 27 , 2016
Noida: A special three days workshop has been organized at Marwah Studios in association with Udaaan a social group to promote young talent in India at Noida Film City powered by ICMEI- International Chamber of Media And Entertainment Industry. More than 90 students from 42 colleges of Delhi NCR participated […] 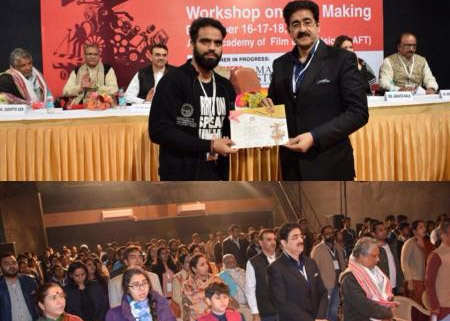