New York: â€œI am happy to be invited here at Indian Consulate General at New York. It gives me pride in expressing my achievement to the Ambassador H.E. Dnyaneshwar Mulay and let him know that I am carrying the success back homeâ€ said Sandeep Marwah President of Marwah Studio and Asian Academy of Film And Television at Consulate General of India at New York.

â€œMy hearties congratulations to Sandeep Marwah and his team on the occasion of receiving an award from Kanbar Institute of Film And Television on Pioneering in Mobile Cinemaâ€ said Ambassador H.E. Dnyaneshwar Mulay the Consul General of India at New York.

The occasion was the Press Conference of Indian Doctors based in United States of America and launching of Research Foundation by them.

India Is Well Appreciated At Metropolitan Museum of Art

Sat Jan 9 , 2016
New York: â€œI was amazed to see the extra ordinary exposure granted to Indian Art under â€˜Sultan of Deccan India 1500-1700-Opulence And Fantasyâ€™ an exhibition which has been admired by thousands of visiting tourist in New York at The Metropolitan Museumâ€ said Sandeep Marwah Managing Director of National Tourism And […] 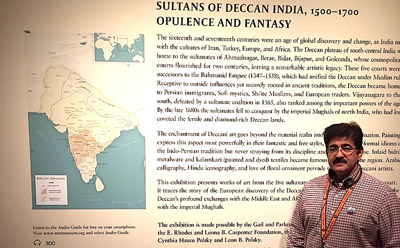