It was great occasion when Ambassador of Hungary in India H.E. Szilveszter Bus invited People from different strata of life to create new synergy within the people who are friends of Hungary.

Sandeep Marwah is the first film person from the film fraternity to bring award from Hungary for his contribution to cinema, television and media. It was first Shoot For Life; Shoot for Earth and then Miskolc International Film Festival where he was also invited to inaugurate the festival and as international jury.

Fri Jan 8 , 2016
New Delhi: You need to have strong determination to reach to the top: then only you get divine energy to fight with the unforeseen circumstances on your wayâ€ said Sandeep Marwah President of Marwah Studios while appreciating and inaugurating the exhibition of sculptures at Triveni Kala Sangam art Gallery at […] 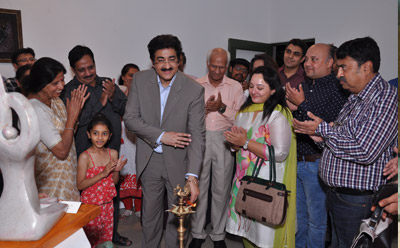