“It is no less than a spiritual job when you go out of way to promote people who have done well but still not known to the World. This is what this book has done to few achievers. I appreciate the efforts of Dr. Gagandeep Kaur and congratulate all the women on the release of the book,” said Sandeep Marwah while releasing the book.

K.T.S. Tulsi Member Parliament Rajya Sabha also spoke on the Women Empowerment and congratulated every one on this successful releasing of book.

Tue Oct 9 , 2018
Noida: A renowned Japanese Film Maker Norihiro Koizumi screened his popular film Chihayafuru Musubi at AAFT School of Cinema, which was highly appreciated by the audience. The two-hour film has been the biggest grocer in Japan. “We appreciate the gesture extended by Japan Foundaton for making us the part of […] 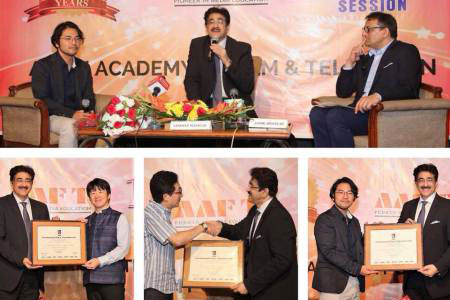