New Delhi; 10th December has been declared and celebrated by United Nation as the International Day of Human Rights. The social organization All India Council of Human Rights Liberties And Social Justice had a grand function at India Islamic Cultural Centre, New Delhi to honor some of the prominent personalities of the country who have contributed to the social cause.

Sandeep Marwah the five times World record holder in media, World Peace Ambassador and Global Cultural Minister was the guest of honor who presented the awards. The first Bhartiya Manav Adhikar Samman-2015, a national level award was for H.H. Holiness Dalai Lama which was collected by his minister representative.

â€œI am honored to honor H.H.Dalai Lama for his untiring contribution to the World Peace. His vision is the blessings to the whole World,â€ said Sandeep Marwah. All awards were dedicated to the former President of India Late A.P.J. Abdul Kalam.

More than 30 awards were presented to people from different segments of life who all have contributed immensely to the social welfare and society upliftment informed Dr. Anthony Raju the Global Chairman of the organization.

Delhi Gaurav Award for Sandeep Marwah at Vigyan BhawanNew Delhi: Sandeep Marwah has brought the laurels to India. He is the only person from the field of media and culture who has brought 40 International awards to the Nation. There are five international records in media by Sandeep Marwah. His contribution to media and entertainment industry is marvelous. Devender Panwar read the citation in a jam-packed Vigyan Bhawan at New Delhi. Dr. Harshvardhan Union Minister of Science And Technology presented the National Award to Sandeep Marwah for his deep involvement in the field of art and culture, media and entertainment. â€œWe need sincere and dedicated workers like Sandeep Marwah in India to promote this country and create a world reputation for Indiaâ€ said Dr. Harshvardhan honoring Marwah. â€œNothing is difficult in life if you have a strong determination to achieve. The positive attitude can bring you success,â€ said Sandeep Marwah while addressing to the audience at Vigyan Bhawan. 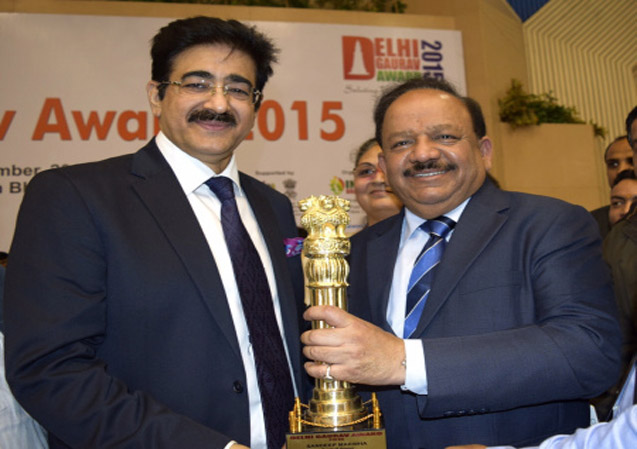