The education includes the case study of Sandeep Marwah from stage artist to founder of Noida Film City where more than 350 channels are being broadcast to 162 countries of the World and how 30,000 employment has been generated from here for media and entertainment industry.

The study also includes the production of 4500 television programs, 125 feature films and producing of largest number of short films in the World. Sandeep Marwah has five World Records in media to his credit. Nothing is impossible for a willing mind,â€ said Sandeep Marwah.

â€œOn behalf of International Study Program of UCLA delegation of MBA let me thank you for meeting with us and adding to our learning experience in Indiaâ€ said Tereza Wodenhouse Coordinator of UCLA. â€œWe look forward for future cooperation,â€ added Prof. Romain Wacziarg of UCLA.

India And Azerbaijan Will Work Together Towards Cultural Promotion December 21, 2015

Fri Jan 15 , 2016
Noida: â€œWe will work towards the promotion of cinema, art and culture together. India and Azerbaijan will develop its friendship through films and media,â€ said H.E. Ibrahim Hajiyev Ambassador of Azerbaijan to India on his visit to the international Headquarters of International Chamber of Media And Entertainment Industry at Noida […] 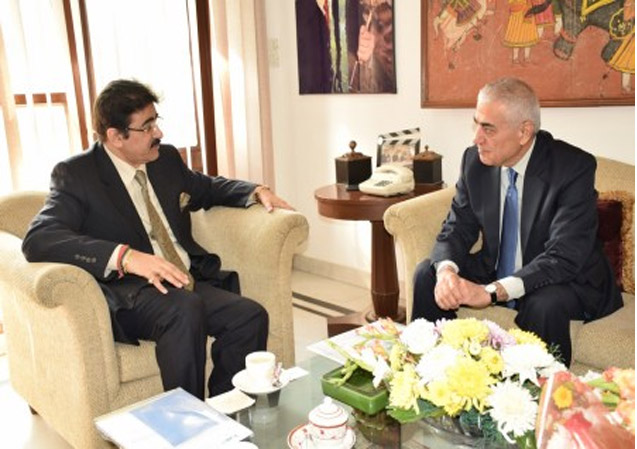