New Delhi: Organizers have marked 100 days to go before the opening of the Rugby World Cup by saying the challenges of staging the sport’s showpiece event in a non-traditional rugby nation have largely been overcome, most particularly with ticket sales.

The Sept. 20 to Nov. 2 tournament will feature 20 teams playing across 12 cities stretching from Japan’s northern main island of Hokkaido to Kyushu in the southwest.

“It’s the first time the event will be held outside of the traditional rugby strongholds, having started in 1987 with a Rugby World Cup held jointly by Australia and New Zealand. The tournament has also been hosted across Britain and Ireland, France and South Africa,” informed H.E. Yogesh Punja High Commissioner of Fiji to India.

“I am pleased to be here for this sports oriented program. India is coming up in Rugby team and sure soon we will be playing in World Cup,” said Sandeep Marwah President Marwah Studios & Chair for Indo Fiji Film And Cultural Forum.

ICMEI and Embassy of Tunisia Will Work Together

Fri Jun 21 , 2019
New Delhi: The President of International Chamber of Media And Entertainment Industry Dr. Sandeep Marwah visited H.E. Nejmeddine LAKHAL Ambassador of Tunisia to India to explain the wide section of activities related to art and culture, conducted by the Chamber. “We are here to support the embassy to fulfill their […] 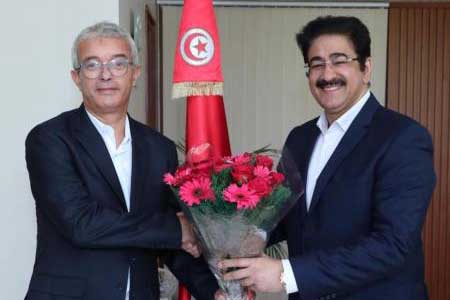