New Delhi: Renowned Educationist and media person Dr. Sandeep Marwah Chancellor of AAFT University has been nominated as the Chair of newly formed Indo Tunisia Film And Cultural Forum by Government of Tunisia.

“We have found the right person for the right post, to be the Chair of Indo Tunisia Film And Cultural Forum today launched by Embassy of Tunisia in India in association with International Chamber of Media And Entertainment Industry to promote and develop relation between India and Tunisia,” said H.E. Nejmeddine Lakhal Ambassador Extraordinary & Plenipotentiary of Tunisia in India.

Sandeep Marwah five times World Record Holder is the President of Marwah Studios, Asian Education Group and ICMEI, He has recently been also nominated as the Chief Scout of India. Dr. Marwah has been titled as Global Cultural Minister, World Education Leader, Man of Asia and Global Green Ambassador. His contribution to films, television, media, art and culture is beyond words.

“I am honored to be nominated for chair for Indo Tunisia Cultural Forum. I will put my best to bring this organization to World level,” said Dr. Sandeep Marwah thanking Ambassador of Tunisia and Government of Tunisia for bestowing him this responsibility.

Sat Jul 20 , 2019
Noida: “Ambassador of Italian beauty in the world, he collaborates at events and summits in which he promotes the artistic, cultural and natural wealth of Italy. Angelo deals with events with an attentive eye to the history of art and Italian style, with a design-type approach, where flowers, fabrics and […] 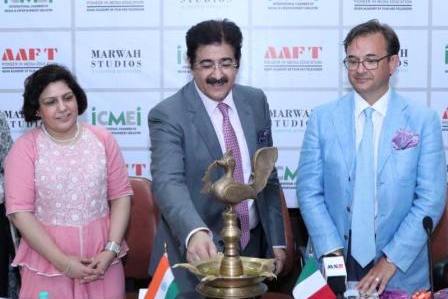