BRICS International Forum was created to work at the grass root level and youth of five countries namely Brazil, Russia, India, China and South Africa. The head of the states of these countries meet and plan strategies as how to work together.

The Indo Russian Film And Cultural Forum is created to bring in love peace and unity through art and culture. The delegates from Russia including Olympic Winner Tatyana Romanovna Lebedeva, Chairman of the Association of Public Associations, National Council of Youth and Children’s Association of Russia Gregory V. Petushkov nominated Sandeep Marwah as the Chair of the forum.

“We are lucky to be here and charmed by the qualities of Marwah. His vision is as powerful as the vision of BRICS. We all request him to be the Chair of Indo Russian Film And Cultural Forum,” said Roman Sergeyevich Chukov Chairperson of the Board at the Russian Centre for Promotion of International initiatives.

“India and Russia has wonderful relations which can be enhanced under the leadership of cultural leader Sandeep Marwah,” said Nina Alekseevna Kudriavteeva Member Parliament. “This is the right time, right place and right people for the IRFCF,” added Nelli Sergeevna Danshina Member Parliament.

“The forum will build new relations between the different groups of people from two countries and will bring films, television, media, art and culture as a source of bringing in love peace and unity,” said Sandeep Marwah accepting the Leadership.

Later Marwah honored every member present there with the life membership of World Peace Development And Research Foundation and memento of the International Summit on BRICS.

Wed Mar 14 , 2018
Noida: The delegation from South Africa was here in Noida to attend the international Summit on BRICS designed to spread the voice of love, Peace and Unity through art and culture organized by International Chamber of Media And Entertainment Industry in association with BRICS International Forum. “We are proud to […] 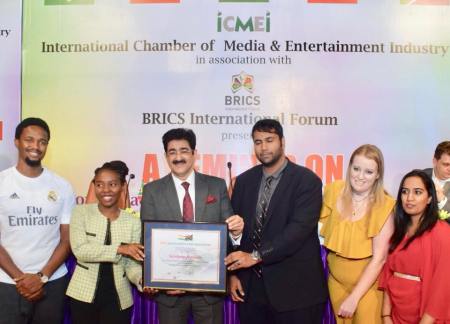