Noida: A well known International media personality and President of Marwah Studios Sandeep Marwah has recently been nominated as the first Chairperson of newly constituted Indo Maldives Film And Cultural Forum by the Ambassador of Maldives to India, Government of Maldives.

â€œMy presence is a clear indication of our healthy intentions to develop and promote our relations with India through art and culture. The formation of IMFCF- Indo Maldives Cultural forum is the formal action towards the same,â€ said H.E. Ahmed Mohamed Ambassador of Maldives to India during the 5th Global Festival of Journalism Noida 2017.

Sandeep Marwah is a man of versatile personality. He is the President of International Chamber of Media And Entertainment Industry and handling more than 100 organizations directly connected to promotion of film, television, media, art and culture.

He is the recipient of some of the most prestigious international awards like Icon of The Decade, Global Leader, Global Peace Ambassador, Global Cultural Minister, Man of Asia and has been honored 60 times by the 40 different countries of the World. His reach has been registered in 154 countries so far.

Students Must Participate in Art And Cultural Events- Sandeep Marwah

Wed Mar 15 , 2017
New Delhi: â€œEvery student must participate in one or other kind of art and must be part of cultural events for their overall growth of the personality. No event is designed or organized without motive and purpose. Large expenditures are wasted when there is no participation,â€ said Sandeep Marwah President […] 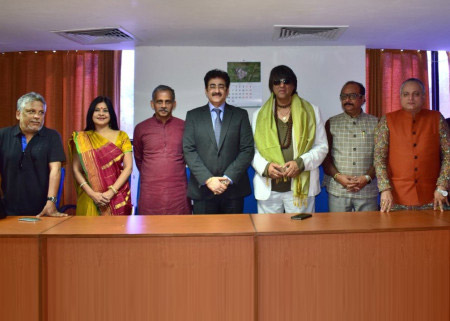