Noida: A well known film and media person Dr. Sandeep Marwah President of Marwah Studios has been nominated as the Chair for Indo Comoros Cultural Forum by H.E. K.L.Ganju Consul General of Comoros in India..

“I am impressed by the amount of work Dr. Sandeep Marwah has so far done in the field of Art and Culture. I have never seen any one with these kind of distinctions. Not only that he is a World Record Holder in Media but he is a real philanthropist and humanitarian,” said H.E. K.L.Ganju while handing over the chairmanship to Marwah in the presence of large gathering at Noida Film City.

“I am humbled and with great honor accept the chairmanship of Indo Comoros Cultural Forum. It is my privilege to serve for the promotion of relations between two countries. We have a lot to offer to this friendship,” said Dr. Sandeep Marwah accepting the memento.

The Indo Comoros Cultural forum was launched earlier in the function to celebrate the 12th International Festival of Cellphone Cinema designed by Asian Academy of Film And Television.

Wed Jan 16 , 2019
Noida: “We are thankful to K.L.Ganju to accept the Patronship of the first and newly constituted Indo Comoros Cultural Forum at International Chamber of Media And Entertainment Industry on this beautiful occasion of 12th International Festival of Cellphone Cinema at Noida Film City,” said Dr. Sandeep Marwah President of Marwah Studios. […] 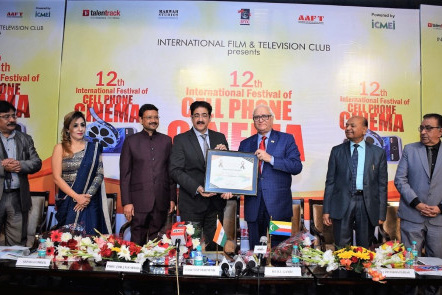