Munich: The Government of Bavaria in Germany has a special relation with the Republic of India. Both the countries are already working together on different projects especially transfer of technology informed Ulrich Konstantin Rieger Leitender Ministerialrat Internationalization Department for Asia, Africa Cooperation with Developing Countries, Bavarian Ministry of Economic Affairs, Energy and Technology

“We are more than happy to receive Sandeep Marwah from Republic of India from the department of Art and Culture including films. We are keen in working together and Government of Bavaria will be ready to work on your project, We have special place in our heart for the films from India,” said Ulrich K Rieger appreciating the level of work Marwah has done so far.

“We need some special attractions by Bavaria to bring Indian film makers to shoot films here. We would like to present one scholarship for the deserving student to learn film in India followed by festival of Indian films in Munich and festival of German Films in India. The Indo German Film And Cultural Forum will undertake the responsibility of all the activities,” said Sandeep Marwah President of ICMEI.

“On the other hand ICMEI will facilitate Germans to project themselves in India,” added Hannes Schurger Chair IGFCF Germany. ”We will support the organization from both the ends,” added Dr. Deepak Narwal  Economic Senator of European Economic Senate, who has interest in India and Germany too. Reseri Sem Member Parliament Will also support the cause.

AAFT And TUM Tech Gmbh Will Work Together

Mon Jul 2 , 2018
Munich: One of the most popular and renowned University TUM Tech Gmbh has shown interest in joining hands with AAFT- Asian Academy of Film And Television to work together in the common subjects like films, media, management and other technical courses. Sandeep Marwah met Dr. Christian Hackl the Managing Director […] 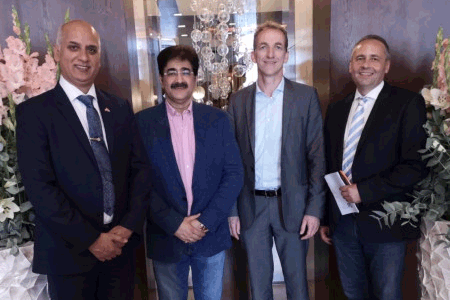