Budapest: â€œI extend my heartiest congratulations to Sandeep Marwah President Marwah Studios for receiving the most prestigious award from House of Commons at British Parliament. It is a pleasure to see him in Hungary,â€ said H.E. Rahul Chhabra Indian Ambassador to Hungary and Bosnia and Herzegovina at Budapest in a get together in honor of Marwah.

â€œI am pleased to inform about Indo Hungarian Film And Cultural Forum to Ambassador which was constituted few years back at Hungary itself. Ample has been done to promote film, television, media, art and culture to bring two countries together under this forum,â€ said Sandeep Marwah quoting many events which had taken place in India.

ICMEI- International Chamber of Media And Entertainment Industry is looking for more opportunities to work with Hungarians in the near future. The meeting was concluded with grand dinner.

Tue Sep 12 , 2017
Budapest: â€œ Our Heartiest congratulations to Sandeep Marwah on receiving prestigious award from House of Commons at British Parliament. His contribution to International relations and especially Indo Hungarian are worth mentioning,â€ said Edit Osko renowned travel agent of Budapest announcing an award for Sandeep Marwah in a meeting at Hotel […] 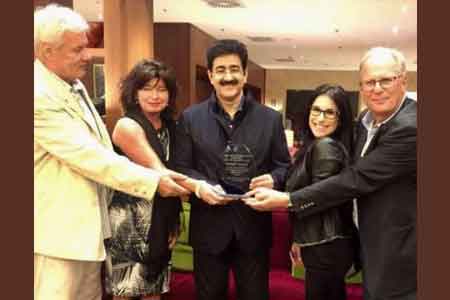