Tashkent: Eighteen-member delegation comprising of film, television and media persons from different organizations of India visited Republic of Uzbekistan under the leadership of renowned media personality Sandeep Marwah on the invitation of Government of Uzbekistan.

The agenda was very clear for Sandeep Marwah as H.E. Farhod Arziev Ambassador of Uzbekistan to India earlier nominated him as the Chair for Indo Uzbekistan Film And Cultural Forum. Marwah has already entertained the high power delegation from Tashkent at Marwah Studios and also met another fifteen people delegation before leaving for Tashkent. He also attended and participated in the film festival organized by the Embassy at New Delhi.

The Minute to Minute Program was consisting of meeting with the Ministry of Cinema, Art and Culture, H.E. Vinod Kumar Ambassador of India to Uzbekistan, Film And Television And Media companies of Uzbekistan, Student exchange programs, Proposals for Film festivals, an award function at Hotel Uzbekistan and to attend networking lunches and get together by important people of the city.

The two state governments through he Embassy of Uzbekistan and the Embassy of India, both were supporting the delegation to come back with the flying colors. It was one of the most successful state visits with concrete results.

The visit has given new blood to India and Uzbekistan relations and to cultural diplomacy of India. “ I am more than satisfied with the results of our five day visit to Tashkent. We have done enough to keep ourselves busy till our next visit to Tashkent end of the year,” said Sandeep Marwah at the press conference at Tashkent International Airport.

Tue Jun 5 , 2018
New Delhi: Women usually develop a vision to wear the crown and to be a cover girl with their beauty, but sometimes those vision get covered with the fog of hesitation about being over-weighted. As a result, this dream had no potential of being realized. I AM THE WORLD platform is […] 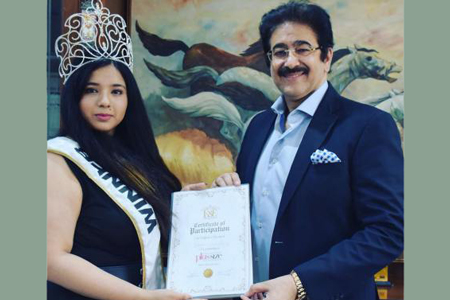