“Sandeep Marwah is a living legend, the only person to create six world records in media and chairing 100 art and cultural organizations. His contribution to cinema and arts is beyond reach,” said U.S. Sonthalia Publisher of the Magazine.

It is for the first time that 100 hundred people together released the Magazine which is only on single person –Sandeep Marwah founder of Noida Film City-the fastest growing film city in the World, Marwah Studios-the first professional film studio of North India, AAFT-the first private film school of the country.

Marwah is recipient of almost 550 awards from all over the World. He has been titled as Global Cultural Minister, Global Peace Ambassador, Global Green Ambassador, Man of Asia, Icon of The Decade, International Media Guru and many others.

Recently he has been honored in House of Commons of British Parliament in London as Peace Ambassador. More than 30 countries honored him with the Chair of their cultural organizations informed Col. Pradeep Gupta Director ASMS.

Tue Jan 16 , 2018
“We are thankful to all those who have respected the importance of journalism-the forth pillar of Democracy. Journalism has always kept us alive and alert. The truth must be brought to the table. NAI has gone out of way to look after the needs of its members and kept them […] 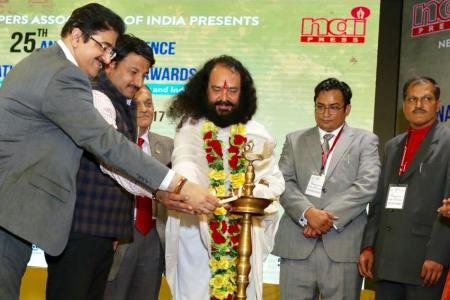