Bengaluru: â€œIt is a wonderful day when I am sharing the dice with some of the important people of this country who all are achievers. The filmmakers have to learn how to be enthusiastic about their profession to be successful in life,â€ said Sandeep Marwah President Marwah Studio at the inauguration of 3rd Rolling Frame Film Festival at Bangalore.

Kannada Film Director TS Nagabharana, the guest of honor at the Rolling Frames Film Summit, says, â€œI strongly believe that there are many budding filmmakers who have the capability to reach the next level. All they require is a little nudge to reach thereâ€.

â€œRolling Frames Film Summit provides the sort of exposure and guidance these artists deserve. They get an opportunity to interact with world renowned artists and gain insight into the art of filmmaking.,â€ said Harsha setty

The international exposure to film makers is must to churn out better cinema. A vast area of ideas can be developed by watching cinemas at the festival itselfâ€ said H.E. Dr. Sabit Subasic Ambassador of Bosia And Herzegovina to India.

Rolling Frame Film Festival is showcasing 30 final films selected out of hundreds of films received from all over the World. Asif Iqbal Honorary Consul Republic of Suriname and Biren Ghosh Country Head Technicolor also spoke on the occasion.

Thu Jan 14 , 2016
Bangalore: The father of Cellphone Cinema, five World record holder in Media, Founder of Noida Film City, Teacher to 12000 media professionals a veteran journalist, film maker, educator Sandeep Marwah is chairing more than 30 National and International organizations in media including the President of International Chamber of Media And […] 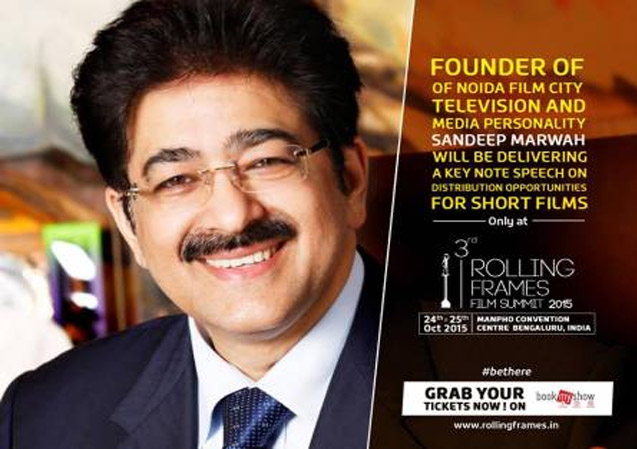