New Delhi: Third edition of National Gaurav Award took place at Vigyan Bhawan, the most prestigious auditorium of Government of India, to felicitate 30 most prominent people of the country who all have contributed to the building of Nation through their extra ordinary services to the society.

“Sandeep Marwah recently also honored as Global Peace Ambassador at House of Commons in British Parliament in London, Presented with an honoris Causa by the Serbian University is a five times World Record Holder. He is chairing 100 national and international social organizations,” citation was read before honoring Sandeep Marwah.

The award was presented by Senior Rashtriya Swayamsevak Sangh (RSS) office-bearer Indresh Kumar and Chidanand Saraswati of Parmarth niketan Ashram. The event was managed by Devender Panwar of Brave Heart.

Sun Dec 17 , 2017
New Delhi: A special meet was organized by the Delhi Study Group under the leadership of Vijay Jolly to interact with H.E.Tomasz Kozlowski the Ambassador of the European Union to India and Bhutan at his residence. A group of 30 people were present there to learn and understand the relation […] 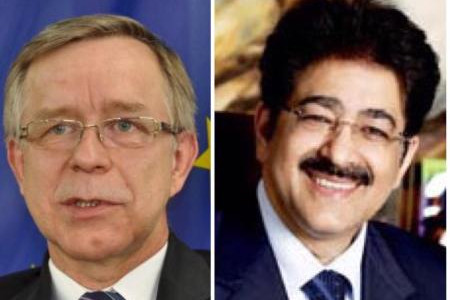