New Delhi; The annual program Surtarang by Sangam Kala Group under the leadership of V.S.K. Sood was held at the main hall of Srifort Auditorium to promote music.

The event was designed to give golden opportunity to selected 18 best singers selected out of 800 short listed from all over India after the selection from thousands in 77 different chapters of Sangam Kala Group.

The event also highlighted all those who have contributed in the field of art and culture. “Sandeep Marwah the founder of Film city, Marwah Studios and Asian Academy of Film And Television has promoted music from last 25 years. His untiring contribution and promotion of Indian music to the whole World is beyond comparison. He deserves the highest award in culture,” said V.S.K.Sood the president of the organization.

“I am more than happy to receive the award. It has given me the new energy to work hard in the field of music,” said Sandeep Marwah thanking the association in a jam-packed hall. Later 18 best singers were presented with Sur Sangam Award.

Wed Oct 3 , 2018
Noida: WE are here to share our experience in film industry. What all we had to go through must be told to make you a perfect film maker. Rome was never built in a day. You have to be street smart to be successful,” said Vindu Dara Singh while narrating […] 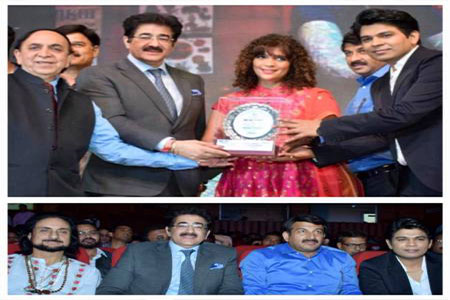