â€œSandeep Marwah is teacher to 12000 Media professionals, producer of 2300 Short Films, associated with large number of film and television production of many television channels. He is Chairing more than 100 national and international organizations.,â€ she added

â€œRecently he has been awarded as Peace Ambassador in House of Common at British Parliament in London. He has already been titled as Global Cultural Minister, Global Green Ambassador, Icon of The Decade, Man of Asia and recipient of more than 500 hundred awards from all over India,â€ she concluded with huge round of applause in the auditorium.

â€œWe are honored to honor Sandeep Marwah a degree of Doctorate which he deserves many years back. No one has done so much of work in media as an individual. He has broken all the records,â€ said Padam Shri Dr. Shyam Singh Shashi Honorary Chancellor of International Roma Cultural University Serbia.

â€œA huge work in media and entertainment industry with full importance to art and culture is a great idea. Sandeep Marwah has created a wonderful niche for himself. Six world records to his credit means something,â€ added Padam Bhushan Dr. Satyavrat Shastri

â€œNot only in India Marwah has developed and promoted relations with the World through art and culture. Touching 145 countries sounds magical. He is the true Ambassador of art and culture,â€ said

â€œThe country is proud of Sandeep Marwah. His untiring efforts in the field of art and Culture have brought him such a great status. His contribution is no less than a ministry,â€ said Dr. Yogendra Narain Former Secretary General of Rajya Sabha.

â€œThe University is proud to conferred upon Sandeep Marwah an Honorary Doctorate in Philosophy for his deep research, untiring contribution and non stop involvement in different segments of art and culture,â€ said Jovam Damjanovic President of World Roma Organization & Founder of University also the former Federal Minister from Serbia.

The degree was handed over to Marwah with great respect and in a very charged and emotional environment. â€œI feel so responsible towards my industry, my people and my country. I am feeling elevated and will prove every importance of this degree,â€ said Sandeep Marwah thanking each and every one associated with him from last 30 years of his career.

Mon Oct 16 , 2017
New Delhi: â€œIf you want to remain alert, young and knowledgeable then you must read as much as you can. Books are the best companions of Human being. I love books and they are part of my life,â€ said Sandeep Marwah while releasing the book of young writer Kevin titled […] 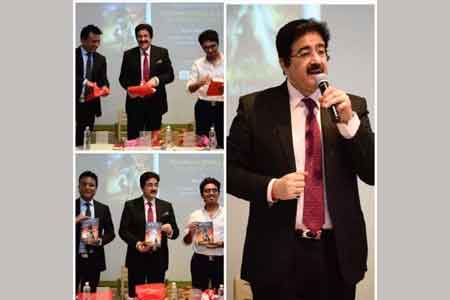