Recently Sandeep Marwah was honored by Shri Shiv Pratap Shukla Union Minister of State, Ministry for Finance, Government of India for running most cost effective film school in the World. He has churned out 12000 media professionals from all the states of India including Bihar and 120 countries of the World. Citation read by Sewak Rajeev Kumar.

“Noida Film City is the fastest growing film city in the World with approximately 17000 Media professionals working in 3 shifts of 8 hours each and cascading effect is that 150,000 people earning their bread because of this film city including many from Bihar. Sandeep Marwah is the founder of this city,” added Sewak Rajeev Kumar President of the Association.

“I am obliged to the organization for considering me for this prestigious award,” thanked Sandeep Marwah while accepting the award from the Minister at Convention Centre, NDMC Complex, New Delhi in presence of huge audience.

Mon May 7 , 2018
New Delhi: Three days Guru Pranam Ustav of art and culture to promote Odissi dance and music designed by Jyoti Srivastava of Vaishali Kala Kendra was inaugurated by well-known art promoter of the country Sandeep Marwah at Azad Bhawan of ICCR in association with Ministry of External Affairs, New Delhi. […] 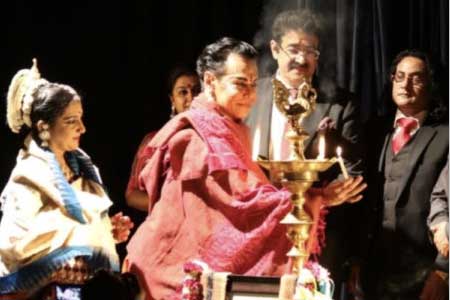