New Delhi: A colorful presentation of 25 years of cable and broadcasting business in India was projected by the Aavishkar Group at Hotel Lalit followed by the 9th Edition of BCS Rattna Awards to some of the most prominent persons of the industry.

The award was bestowed upon internationally known media person Sandeep Marwah who was there to receive his award personally at the mega event designed by Dr. A.K. Rastogi.

“Largest Media Education Hub in Asia ” announced for AAFT- Asian Academy of Film And Television and presented by Gajendra Singh Shekhawat Union Minister of State Ministry of Agriculture And Farmers Welfare, Government of India in the presence of Vijay Sampla Union Minister of State Ministry of Social Justice And Empowerment Government of India, Minakshi Lekhi Member Parliament Loksabha from Delhi, S.P.Jain a well known Social Worker and august audience of broadcasting trade from all over India.

“We are proud of Sandeep Marwah and his untiring contribution to the nation. He truly deserves the appreciation,” said Gajendra Singh Union Minister.

“I am thankful to Aavishkar Jury for awarding me I assure you that I will keep the flag of India flying in film and television training. We have touched 120 countries so far, we will be more next time,” said Sandeep Marwah thanking the organizers.

Sandeep Marwah Special Guest On The National Day of Azerbaijan

Tue May 29 , 2018
New Delhi; The Embassy of Azerbaijan celebrated its National Day by calling some of the best people in town. A large number of Ambassadors, High Commissioners and people from the diplomatic corps attended the function. Renowned Film and media personality Sandeep Marwah was also present there in the capacity of […] 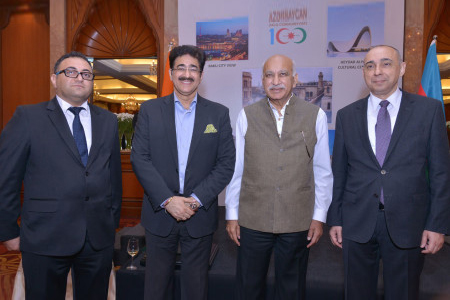