Munich: The visit of Sandeep Marwah to Bavaria has brought lots of hope to Munich. His achievements were already highlighted with the members of parliament and other senior Government officials.

Sandeep Marwah Five times World Record Holder in Media is the founder of Noida Film City, Marwah Studios a renowned brand in media and Asian Academy of Film And Television one of the ten best film schools of the World. His association with 145 countries and formation of 100 social and cultural organizations has already brought him the title Global Cultural Minister during large number of international summits and conventions.

Member of the parliament Dünkel, Norbert honored Sandeep Marwah with historically designed Memento Achievers Mug a souvenir from the parliament itself at the Bavarian Parliament.

“ Marwah deserves the highest awards for his contribution to international diplomacy. He works like global minister. We are today feeling honored to honor him,” said Hannes Schurger a renowned social worker.

Tue Jul 3 , 2018
Munich: It was occasion for the parliamentarians to meet and greet the Minister President of Bavaria H.E. Markus Soder and other dignities from the Government of Bavaria. Member Parliament Ms Reseri Sem invited Sandeep Marwah as a special guest from India to the get together. Sandeep Marwah President Marwah Studios […] 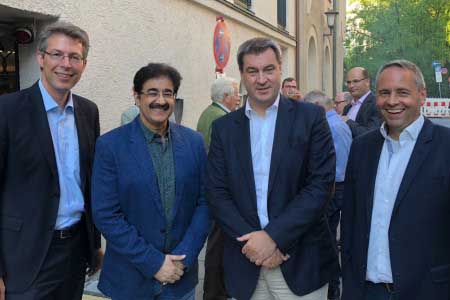