Noida: Renowned film, television and media personality & five times World Record Holder Sandeep Marwah President of Marwah Studios today was honored and nominated Chairperson of first ever cultural forum created by the Government of Gabon on the visit of H.E. Andrew Crepin GWODOG Minister for Environment Protection and Natural Resources of the Forest and the Sea, Government of the Republic of Gabon at New Delhi.

â€œIndia and Gabon has a very old relations but it need to be strengthen by involving large number of nationals of both the countries. Nothing is better than joining hands in understanding and promoting cultures of two countries,â€ said H.E. Andrew Crepin, Minister of Republic of Gabon.

â€œSandeep Marwah being already designated as the Global Cultural Minister is the best choice to be nominated as the Chairperson of Indo Gabon Cultural Forum. Government of Gabon is honored to honor Marwah,â€ said H.E. Desire Koumba Ambassador Extraordinary & Plenipotentiary of Gabon to India.

â€œIt is my great pleasure and honor to accept this responsibility of being bestowed upon me by the Minister himself. I will leave no stone unturned to make it an international body,â€ said Sandeep Marwah receiving the award in the form of chairmanship of Indo Gabon Cultural Forum.

Thu May 19 , 2016
Noida: It was a great occasion when Indo Gabon Cultural Forum was launched by H.E. Andrew Crepin GWODOG Minister for Environment Protection and Natural Resources of the Forest and the Sea, Government of the Republic of Gabon at Noida Film City initiated by International Chamber of Media And Entertainment Industry […] 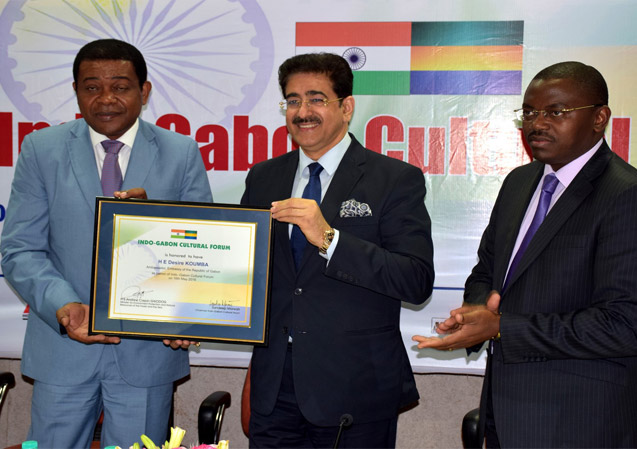