With the coming of film city to Noida the total environment in the North of India has seen a new change in the field of arts, culture, films, television and associated industries like advertising, music, dance and drama. The credit of this change go to the founder of film city Sandeep Marwahâ€ a citation was read from the stage of Nrityangan Cultural Society.

â€œSandeep Marwah has created five world records for himself and has already brought many laurels to Indiaâ€ added Organizers while handing over prestigious award to Sandeep Marwah at Sriram Centre for Arts And Culture at New Delhi.

â€œI am pleased and honored to be part of this event. I am thankful to Nrityangan for giving me so much of respectâ€ thanked Sandeep Marwah President of Marwah Studios.

The program contained awards to some prominent people from art and culture followed by Dance and Music Recital and fashion show.

National Federation of Tourism Blessed by The Minister 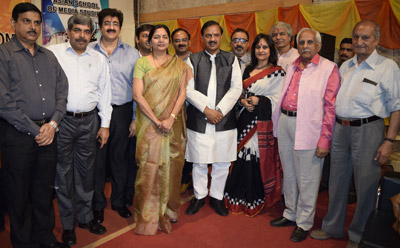