Noida Film City: â€œWe have never seen a festival of this kind in my entire carrier of journalism of 30 years. The scale of festival along with the quantity of programs and quality of people at one place at one time is the charisma of Sandeep Marwahâ€ said P.Sreedhar Reddy President of Newspaper Association of India Karnataka
.
The Karnatka State of NAI presented this award to Sandeep Marwah for his untiring efforts in promoting journalism in the World. No one can be matched with the ideas and execution of Sandeep Marwah added people from Karnataka.

â€œI am thankful to the entire senior journalist for their whole heartily participation in 3rd Global Festival of Journalism. I will request more participation from other states in the same way. The award has encouraged me to work hard and prove better next timeâ€ said Sandeep Marwah accepting the award.

ENGs Entertained Delegates throughout the Day of Festival

Wed Jan 6 , 2016
Noida Film City: A special segment was created to project small and tiny films of one minute to three minutes throughout the three days of 3rd Global Festival of Journalism Noida 2015. â€œThe portion of Nano films was a great hit, any one and every one who- so- ever […] 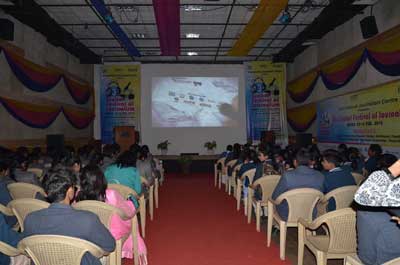