Varanasi: Legendary educationist and founder of Noida film city Sandeep Marwah was honored with Confluence –Aavaran Award by the Ministry of Textiles, Government of India at a grand function at Deen Dayal Hastkala Sankul at Badalpur Lamhi, Varanasi for promoting different kinds of art and culture of India.

“It all started with exporting handicrafts to Europe, followed by manufacturing and export of Indian carpets and durries be from Kashmir, Agra, Gwalior, Bhadhoi, Mirzapur, Amritsar and Jaipur. Now I am promoting again handicrafts and textiles through my AAFT School of Fashion And Design,” informed Sandeep Marwah receiving award from the Ministry.

“I am excited that the award has been given in Varanasi, the constituency of our Hon able Prime Minister Narendra Modi,” added Marwah. The function was attended by large number of handicraft and textile manufacturers, Exporters, Government officials from state and Central Government, High Commissioners and Ambassadors from New Delhi and members of Confluence Foundation.

Three-day exhibition of handicrafts and textile was inaugurated at the most prestigious and popular Deen Dayal Hastkala Sankul at Varanasi curated by Eastern UP Exporters Association and the Development Commissioner of Uttar Pradesh, from 21st to 23rd April informed Smita Srivastava. 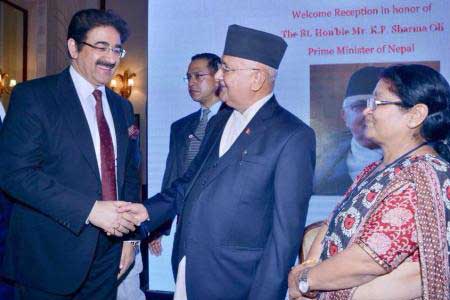